Supported by Inmarsat, Row4Ocean has been forced to abandon its ambitious attempt to break four ocean rowing world records, but delivery of the team’s inspirational message about the problem of plastic pollution in our oceans continues to gather momentum after a courageous battle in the Atlantic. The team of Patrick Bol, Lewis Knollman, Andrew Ruinoff and Matt Wilds was finally halted on 7th January, the 24th day of the challenge, due to irreparable rudder damage on passage from Dakar, Africa to Paramaribo in South America. Opting to stay onboard their 40ft multihull rowing boat ‘Year of Zayed’, the crew attached a tow line to their support vessel, Supertramp, for the remaining 750nm.

When the four-man crew of Row4Ocean set off on December 14, they knew that reliable satellite connectivity would be a valuable factor in the success of their record challenge and ability to get their message across. Aiming to complete the crossing in an incredible 27 days, the crew were well on track for the first half of their challenge, using Inmarsat’s Fleet One connectivity to store and forward fascinating pictures, audio and video, including drone footage. On Day 14, rower, Lewis Knollman commented through a video: “There are many great causes in the world but there is none better than the effort to clean our oceans. This morning we saw a beautiful sunrise and we were surrounded by dolphins for about half an hour. We all see the effects of how humans have polluted the seas it should be a number one priority.”

However, early in the new year, the communication link provided by the Inmarsat support became even more critical when equipment breakdowns turned their challenge into drama on the high seas last weekend with under 800nm to the finish. The crew were forced to deploy a sea anchor to carry out repairs to the rudder, with the drama relayed on video. Then on January 5, the make-shift pin attaching the rudder to the boat sheered once more and the rudder dropped into the sea. On the 23rd day, after two attempts to jury-rig the broken pin, the exhausted team used the engineering experience of Matt Wilds to carry out a solid fix between the rudder and the rudder stock, but it proved too damaged to last. Further exacerbating their problems, the team struggled to make enough drinking water and charge the batteries, plus the gas stove broke.

“We are safe but we are gutted,” commented Patrick Bol from on board Year of Zayed via satellite phone. “From a practical point of view, someone needs to stay on board the boat to keep a watch. In reality there is no space for all four of us, but nobody wanted to leave the boat regardless of the hardship. I would like to thank all of our sponsors and supporters, after so much time and effort, the project failed because of a small piece of metal. It is a pity but we wanted to put out the important message about plastic pollution, and we have at least done that. We were so close, and sometimes you learn more from failure than success.”

Row4Ocean Syndicate Partner, Clive Frost, from onboard Supertramp, added: “Having access to the Inmarsat Fleet One system’s capabilities was a huge source of inspiration, taking on even great significance in these difficult times, driving the tenacious crew forward with welcome, morale-boosting messages from friends and family and encouraging weather reports. It is also important that we can continue to be confident that the plastic pollution messages and progress updates continue to reach far and wide.”

The team are relying on Inmarsat’s global, seamless voice and data service to update social media, while they also have access to Inmarsat’s free ‘505’ safety service, which in an emergency directs a call straight through to a Maritime Rescue Co-ordination Centre (MRCC).

The Row4Ocean crew are using their limited time to paint a vivid and passionate picture of their life at sea and promote a cause that is one of the most significant of our generation. The Inmarsat technology means that friends, family and people all over the world are being drawn into life onboard and experiencing each day as it happens for the crew. As we watch and listen to their highs and lows, successes and setbacks, we have a unique insight into their journey, empathising with the different characters, feeling their pain and joy, and, ultimately, caring about their success and their message about the pollution in our rivers and oceans.

On Christmas Day, the crew were able to send messages to their loved ones through Inmarsat satellite communication. “The support we are getting is amazing from our families and from fans all over the world. We are trying to break records, but the big picture is that this is a media event to get attention for a greater cause,” commented Patrick Bol via satellite phone. “Mankind has discarded plastic and let it float away out of sight from our rivers into the oceans, and there is no apparent ownership of this issue. We have not seen many plastic bottles during the row but plastic in our oceans is a silent killer, it gets broken down into micro-plastics which gets into the food chain.”

Stay up to date with all the news and images via Inmarsat’s Fleet One technology using #row4ocean, via Facebook at Row4Ocean or track Row4Ocean here.

Row4Ocean were attempting to break the following world records:

Inmarsat plc is the leading provider of global mobile satellite communications services. Since 1979, Inmarsat has been providing reliable voice and high-speed data communications to governments, enterprises and other organizations, with a range of services that can be used on land, at sea or in the air. Inmarsat operates around the world, with a presence in the major ports and centres of commerce on every continent. Inmarsat is listed on the London Stock Exchange (ISAT.L). For more information, please visit www.inmarsat.com.

The Inmarsat press release newsfeed and corporate updates are on @InmarsatGlobal. 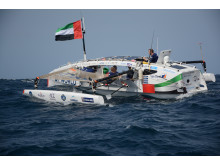 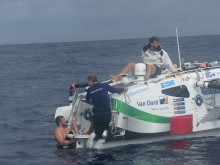 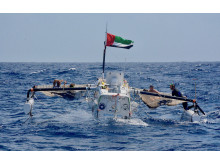 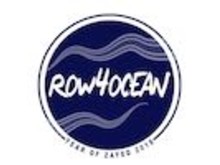 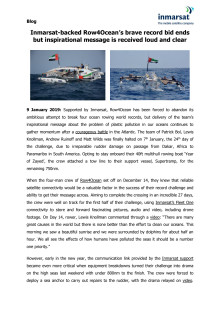 Supported by Inmarsat, Row4Ocean has been forced to abandon its ambitious attempt to break four ocean rowing world records, but delivery of the team’s inspirational message about the problem of plastic pollution in our oceans continues to gather momentum after a courageous battle in the Atlantic.