Solo ocean racer and Vendée Globe entrant Pip Hare will be at Southampton Boat Show, held at Mayflower Park, Southampton from 13-22 September this year. Visitors are invited to head down to the marina and meet Pip on board her IMOCA 60 Superbigou for a glimpse of what will be Pip’s home for more than two months, as she single-handedly battles with some of the toughest conditions on Earth.

The Vendée is the premier event of the ocean racing calendar. In a race limited to 30 boats, the competitors will start from Les Sables d’Olonne on Sunday 8th November 2020, sailing south to Cape Horn and circling the notoriously treacherous Southern Ocean from west to east before returning to the starting point in 2021. With no outside assistance allowed, the skippers are truly alone in their endeavours, a point illustrated by the fact that in the eight events so far, fewer than 100 skippers have completed the race. By comparison, more than 5,000 people have reached the summit of Everest.

Pip’s next major event after Southampton Boat Show is the Transat Jacques Vabre, a 4,350-mile double-handed dash across the Atlantic from Le Havre to Salvador de Bahia, Brazil. Due to start on 27th October, Pip will announce her partner for the race at the show on Saturday 21 September.

Built in a garden in Brittany by the Swiss skipper Bernard Stamm, Superbigou has competed twice before in the Vendée Globe. In the 2000-2001 edition of the race, Stamm was forced to retire with rudder problems, but in the 2016-2017 race Superbigou crossed the line in Les Sables d’Olonne 12th out of 18 boats, sailed by Alain Roura. Beyond the Vendée she set a Transatlantic record in 2001, won the 2002-2003 Around Alone and 2006-2007 Velux 5 Oceans races (single-handed with stopovers), all with Stamm at the helm, and was a finisher in the 2010-2011 Barcelona World Race (double-handed, non-stop). 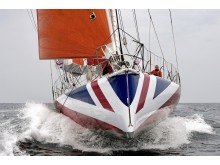 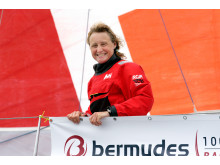 Pip Hare on the Bermudes ...