The YANMAR engine-powered IC37 by Melges is set for the much-anticipated launch of its inaugural season of racing this summer, with initial demand indicating that the success of the burgeoning new class will build with the on-going international delivery of the innovative one-design racer.

In a project envisioned and instigated by the prestigious New York Yacht Club (NYYC) to usher in a new era for the Rolex New York Yacht Club Invitational Cup, the Mark Mills-designed Melges IC37 with YANMAR diesel engine and saildrive was selected to enable a wide range of non-professional sailors to participate on a level playing field. In the great tradition of Corinthian yacht racing, the boats are designed to be sailed for the fun and enjoyment of sailing, so that the test of races is the ability of the crew—not the boat or its equipment. The boat has already captured the interest of the racing world with its innovative class rules, sturdy build, simplicity, easy upkeep, efficient sailhandling and joy to sail, and it was named Sailing World Magazine’s 2019 Corinthian Boat of the Year.

Positive interest has resulted in the NYYC and Melges Performance Sailboats licensing a second manufacturer to accommodate the original 20-boat club order and further private sales, with FIBRE Mechanics, based in Lymington, UK, joining Westerly Marine, in Santa Ana, California, as an official builder of the 37-foot keelboat. The striking dark sails of the fleet of 20 IC37s are expected to be seen at a number of events this season. The first notable event will be NYYC’s One-Design regatta off Newport on June 29-30. This will be followed by sailing’s premier Corinthian interclub competition, the Rolex NYYC Invitational Cup and the Melges IC37 US National Championship, both hosted by NYYC in September, before the boats are transported to Fort Lauderdale in the fall for a winter series in Florida. With the IC37s also now adopted by organisers of the Canada’s Cup, the premier Great Lakes match race between the USA and Canada, the future looks bright for this modern raceboat.

Sander Gesink, Marketing Manager of YANMAR MARINE INTERNATIONAL, said: “The creation of the new Melges IC37 Class is an exciting development in one-design yacht racing and YANMAR is delighted to have been chosen to power these boats. To be unanimously selected by the prestigious group of companies commissioning, designing, and building the yacht is a testament to YANMAR’s product and service reputation. Alongside our distribution partner in California, Boatswain’s Locker, we are excited to join Melges Performance Sailboats, Westerly Marine, and the NYYC in this new one-design tradition.”

Offering exceptional product support through an extensive global network, YANMAR was selected as the ideal partner for this exciting development in international one-design yacht racing. YANMAR has long been renowned for its rugged and reliable engines and the three-cylinder, four-stroke, vertical, water-cooled 21hp 3YM20 offers a great level of power with easy starting and outstanding torque at low engine speeds. With compact dimensions and a weight of only 120kg, this is the ideal choice for high-performance racers. The accompanying SD25 Saildrive units are double sealed for extra protection and carry aqua sensors to identify potential problems before they occur.

When selecting the right engine to power the new class, Andy Burdick, President of Melges Performance Sailboats, explained the YANMAR 3YM20 Saildrive was the obvious choice. He said: “YANMAR is a widely known engine with the best reputation. Not only are they easy to work with for sales but they also provide the best ongoing service for the owners of the boats for years to come. YANMAR’s good record and reputable service network were another big part of the decision.”

The 37-foot boat was selected by NYYC as an innovative race boat perfectly suited to test the skill and teamwork of the best non-professional mixed male and female crews from around the world. The new Melges IC37 Class was conceived to carry on the Rolex New York Yacht Club Invitational Cup (previously run using Swan 42s) which brings together amateur sailors from 21 different countries and 43 clubs to compete off Newport. After it proved difficult to maintain a consistent fleet of privately-owned boats for this prestigious event near its east-coast base, NYYC commissioned 20 IC37s to be purchased and maintained by the club so they may be chartered by members and used for the Invitational Cup.

Designed to be fun to sail and accessible for yachtsmen and women of a wide range of ages, the class rules specify all crews must contain sailors of both genders. Other significant rules to keep things simple include limiting the sail locker to one kite, one jib and one main and forbidding headsail cross sheeting. Boats can be raced by a crew of seven, but eight is thought to be optimal to provide extra weight on the rail.

With its beginnings in Osaka, Japan in 1912, YANMAR went on to become the first company to succeed in making a compact diesel engine of practical size in 1933. With industrial diesel engines as the cornerstone of the business, YANMAR has continued to expand its range of products, services and expertise to deliver total solutions as a diesel engine and equipment manufacturer. Providing small and large engines, agricultural machinery and facilities, construction equipment, energy systems, marine engines, machine tools, and components — YANMAR’s global operations span seven business domains on land and at sea.

Based in the Netherlands, YANMAR MARINE INTERNATIONAL is focused on the recreational marine sector globally, supplying engines for both sailboats and powerboats, and light duty commercial applications. Over the years, YANMAR has built an enviable reputation for proven marine technology delivering high quality and reliability and continues to develop advanced technology for the cleanest and most efficient diesel engines. 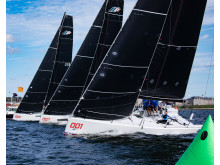 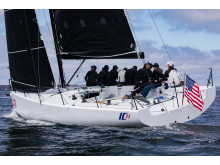 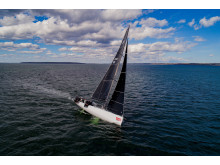 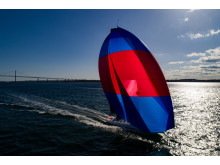 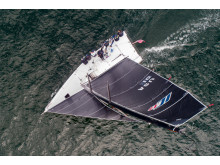 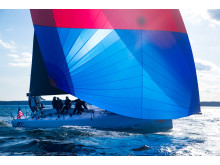 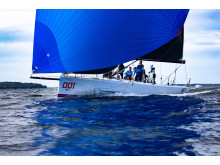 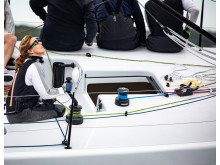 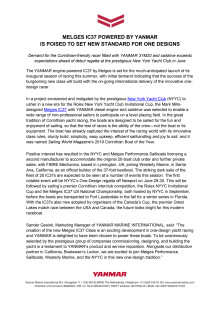 The YANMAR engine-powered IC37 by Melges is set for the much-anticipated launch of its inaugural season of racing this summer, with initial demand indicating that the success of the burgeoning new class will build with the on-going international delivery of the innovative one-design racer.